The A.S.A.P is a surgical and rehab program that involves surgeons and medical practitioners from the Alfred Health, therapists from Epworth Rehab Hawthorn, the Rehabilitation Consultation from Epworth Health and ProMotion Prosthetics.

Mr Frank Bruscino-Raiola is Australia’s leading TMR and Osseointegration surgeon and head of the Plastics department at Alfred Health.

All clients referred to the A.S.A.P will attend an initial appointment at the Alfred Hospital, whereby a comprehensive assessment from all medical practitioners involved in the program will be carried out ahead of determining if any surgical intervention is appropriate.

TMR is a surgical procedure that allows intuitive control for upper limb myo-electric prosthetic users and was pioneered by Alfred Health.

TMR surgery has also seen significant results in reducing pain, and is used for both upper and lower limb amputees to manage significant phantom and residual limb pain.

Soft tissue reconstruction is a surgical procedure that is sometimes requires to assist in improving prosthetic fit; including de-bulking, removal of skin grafts, adherent scars or refashioning the soft tissues of the residual limb.

If you are having ongoing, persistant socket fit issues which are caused by residual limb shape/volume, please contact the A.S.A.P director Mr Steven Gray to discuss your options.

Osseointegration is a surgical procedure carried out at the Alfred Hospital, for the insertion of an implant and abutment, to create a direct attachment for the prosthesis. This abutment replaces the conventional ‘socket’ of the prosthesis.

Although the procedure was first undertaken in 1994 in Australian only a small number of suitable clients have been fitted with a osseointegrated implant and articulated prosthesis to date. Additional research and experience has expanded the knowledge and implications of such a surgical intervention. The system is now available and is an option for the ‘suitable’ trans-femoral and trans-humeral candidates. A collaborative approach is required between client, surgical team and rehabilitation team to realise the potential of this technology and treatment regime.

The summary of the osseointegration program, extrapolated from the ‘Information for Patients with an above knee amputation’ Sahlgrenska University Hospital, outlines the rehabilitation rationale and aims of the OPRA program. 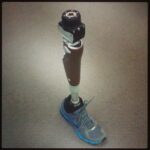 Many people who have tried to use or are using an above knee prosthesis have reported a range of problems and difficulties in using a prosthesis with a prosthetic socket. In a Swedish scientific survey of patients with a unilateral above knee amputation, 72% report problems with heat and sweating in the prosthetic socket, 62% report problems with chafing from the socket, and 44% say it is uncomfortable to sit while wearing the prosthesis and that these difficulties considerably reduce their quality of life.

Direct bone anchorage means that the prosthesis is attached without using a socket. The method is based on the principle of osseointegration, which has been in clinical use for prosthetic replacement of teeth since 1965. By surgically implanting a titanium screw, known as a fixture, into the femur – the thigh bone – the method produces a direct attachment for the prosthetic leg. The concept of osseointegration entails a direct contact between the fixture and the bone tissue, thereby assuring a stable attachment.

The treatment involves two surgical procedures. In the first operation, a specially designed titanium screw known as a fixture is inserted into the residual femur. The fixture is then allowed to heal into the bone for 6 months with no load. During this period it is usually possible to use a standard socket prosthesis as soon as the residual limb has healed. In the second procedure an extension known as an abutment is attached to the bottom of the fixture. This abutment protrudes from the skin penetration area and serves as the attachment onto which the prosthesis is screwed.

However, to ensure a solid attachment between the titanium fixture and the bone, the bone needs to be carefully subjected to a load before the patient can start walking properly with a prosthesis again. This is done through controlled, gradually increased training using a short ‘training prosthesis’. It is not possible to walk with the training prosthesis. The real ‘articulated’ prosthesis is fitted around 3 months after the second operation. In the months that follow the prosthesis can gradually be used more and more, although always with a pair of crutches. Walking without support or with only one crutch is possible around 6 months after the second operation.

The first operation generally requires 5-7 days in hospital, and the second about 10 days. The overall length of the treatment including both operations, rehabilitation and prosthesis provision is estimated at around 12 months for patients with a normal bone quality.

The prosthesis itself is made up of much the same parts as a standard prosthesis. However some components, such as certain knee joints, may not be suitable. At the top of the prosthesis is a special connector  (RotaSafe) which forms the attachment between the abutment and the prosthesis. The connector has an in-built safety mechanism to prevent bone damage in the event of excessive loads, such as in a fall. As with all surgical treatment, there is a risk of complications which can alter the treatment or compromise the results. Superficial infections in or around the skin penetration area are not uncommon. These can normally be treated by particularly careful cleaning, although antibiotics may sometimes be required. More serious complications such as the fixture working loose or rupture of the attachment sections or the bone can also arise. Most complications are treatable.

Once treatment is complete, regular medical checkups are required by both the surgical and rehabilitation team.

Please feel free to contact ProMotion directly for more information in regarding the prosthetic osseointegration rehabilitation for amputees.